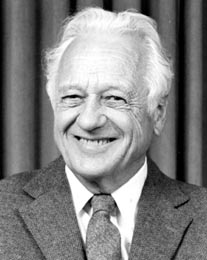 June 12, 1981, Greencastle, Ind. - DePauw zoology professor Forst D. Fuller has seen the University from both sides: first as student, beginning in 1934, and later as a faculty member when he joined the staff in 1947. At the end of this month, after nearly 50 years' association with DePauw, he is planning to retire.

Those fifty years contain a lot of memories for Dr. Fuller. For one thing, he's seen the campus atmosphere become more relaxed. "Twenty to twenty-five years ago it would be rare to see a faculty member lecturing without a coat and tie," he says. "I'm sure the dean would have had the faculty member over to his office, talking to him about decorum and so forth," he adds with a smile.

In keeping with the formality of clothes of earlier days, faculty members were also required to turn in a daily attendance report on their students. "At that time, students were 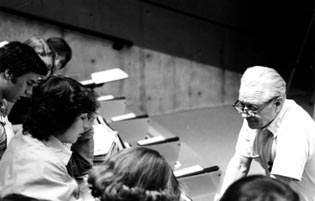 allowed a certain number of cuts," Fuller recalls. "If they exceeded that they were likely to find an added number of required hours for graduation." The attendance reports went by the wayside after "we decided that was kind of like high school," the professor says.

"As a student, I had fine relationships with a number of professors," says the 1938 DePauw graduate. "That hasn't changed. There's always been an informal, close association between faculty and students."

Dr. Fuller was recently named by students as one of the University's five outstanding professors in an all-campus ballot conducted by DePauw's Academic Council. As for his retirement, Fuller says he doesn't intend to give up teaching. He plans to teach second semester every year "until I get tired or they get tired of me or I wear out, or whatever."

To be a good teacher, Fuller says, a person "must enjoy what they are doing and be able to convey to students the feeling of enthusiasm that one must have. A teacher must also realize that they are not omnipotent, 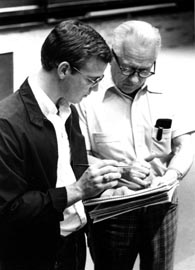 but mere mortals." He describes his philosophy as, "Learning can be fun," and calls the most difficult aspect of being a professor, "The final evaluation of the students work, but this has always been a period of soul searching for me." From his students, Fuller has learned "that each one is a unique and important person."

After graduating from DePauw, Forst Fuller continued his education at Purdue University, where he earned an M.S. in 1941 and a Ph.D. in 1953.