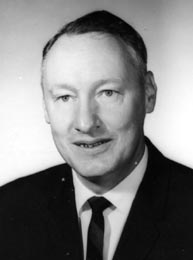 May 25, 1968, Greencastle, Ind. - Clinton B. Gass, chair of DePauw University's department of mathematics, today received a Distinguished Alumni Citation from his undergraduate alma mater, Gustavus Adolphus College in St. Peter, Minnesota. Professor Gass was one of five individuals recognized at the college's alumni reunion banquet. He was honored for his contributions to education.

Before coming to DePauw, Gass served as an instructor in mathematics at the University of Nebraska (1942-43), an associate professor of mathematics at Nebraska Wesleyan University (1943-44), and then completed two years in the U.S. Army, being assigned to the Atomic Bomb Project (theoretical physics) at Los Alamos, New Mexico from 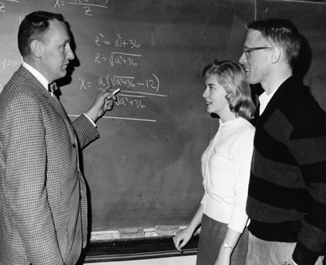 Gass has been particularly successful in attracting for DePauw substantial National Science Foundation funds for summer institutes. The professor served as the first director of DePauw's institute for elementary and secondary teachers, which was one of the first institutes of its kind in America in 1959.

Dr. Gass is co-author of College Algebra, which was first published in 1956 and revised in 1963 as College Algebra and the Basic Set Theory. He has served as chair of both the Nebraska and Indiana sections of the Mathematical Association of America. Other service includes chairing the Indiana state Mathematics Advisory Committee, and Gass has lectured widely on behalf of the Indiana Academy of Sciences.