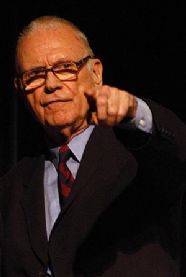 August 23, 2007, Greencastle, Ind. - "The leaders of the 9/11 commission are preparing a progress report on their recommendations for improving the nation's anti-terrorism defenses, with plans to release it around the sixth anniversary of the 2001 terrorist attacks," reports the Baltimore Sun. "Former 9/11 commission chairman Thomas Kean and vice chairman Lee Hamilton have been working in recent weeks with some former aides to assess the status of the recommendations they made in their initial report three years ago."

Hamilton, a 1952 graduate of DePauw University who served 34 years in the U.S. House of Representatives, tells the newspaper the timing of the update is appropriate. "A number of steps have been taken at both the executive and the legislative levels since we last issued a report."

Siobhan Gorman writes, "The new report will arrive on the heels of a

Read the complete text at the Web site of the Denver Post.

Lee Hamilton also co-chaired the Iraq Study Group. Learn more about him in this previous story.