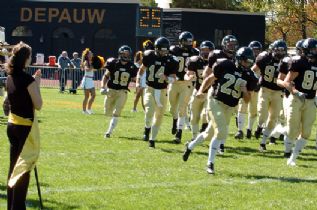 August 30, 2007, Greencastle, Ind. - "Senior RB Jeremiah Marks set the school's single-season rushing record last year (1,117 yards) and needs 22 to break the career mark (2,941) that has stood since 1974," notes the Indianapolis Star's preview of the Tigers 2007 football team. "He is three points from setting the school's career scoring record of 248. QB Spud Dick, who threw for 1,169 yards as a freshman, is one of 10 offensive starters back."

Each Indiana college has a "why they could be good" comment -- which is seen above -- as well as a "why fans may worry" remark. In the latter category, Jeff Rabjohns notes that DePauw University "lost eight starters on defense, including All-American DE Dustin Hertel."

Coach Matt Walker '99 and his team, which includes 67 new recruits, are preparing to open the 2007 football season September 8 on the road versus Anderson University.

Read about an Associated Press preview of the upcoming campaign, and visit DePauw's football team online.