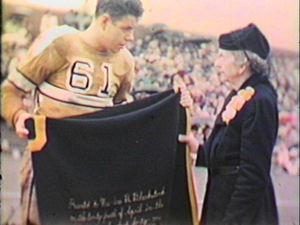 October 4, 1941, Greencastle, Ind. - DePauw University dedicated its new football facility, Blackstock Stadium, in style this afternoon, defeating Carleton College 7-6 before an Old Gold Day crowd estimated at 2,500. Mrs. Ira B. Blackstock, who in February donated the funds to build the stadium in memory of her husband, was on hand for pre-game ceremonies.

The new, $80,000 stadium features grandstand seating for approximately 4,000 spectators, as well as a press box, dressing rooms with showers and other facilities. In 1921, the Blackstocks gave DePauw $25,000 to create Blackstock Field. Prior to that point, the University's football, 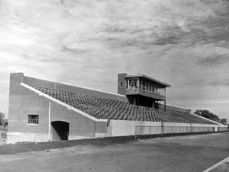 baseball and track teams played games on McKeen Field, which is now used for intramural athletics.

Film footage of today's dedication (which includes narration from Ken Owen, DePauw 1982) can be seen here:

Other vintage football footage can be seen in "Monon Memories," which celebrate DePauw's rivalry with Wabash College dating back to 1890. A full roster of the clips can be accessed by clicking here.