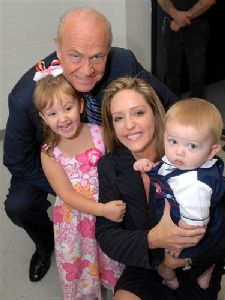 September 9, 2007, Greencastle, Ind. - "I would say, like any other spouse, I am a friend, I am an adviser," Jeri (Kehn) Thompson, wife of presidential candidate Fred Thompson and 1988 graduate of DePauw University, tells the Tennessean. Today's edition of the newspaper carries a lengthy profile, which begins, "If her husband is elected president, Jeri Thompson will be the youngest first lady since Jacqueline Kennedy. But unlike Kennedy, a glittering socialite whose style created an image as strong as her husband's, Thompson is a mystery woman to most Americans." (photo at left shows the Thompsons with their two children in Iowa, September 6)

In the story, Jeri Thompson discusses her childhood and family life, noting that her mother was a librarian, "which is probably why I ended up an English major." Beverly Keel writes, "Unlike many of her DePauw University classmates, she worked part time as a waitress to offset expenses once she got to college. 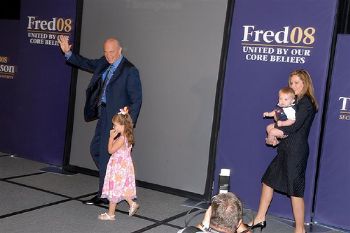 'That wasn't the cool thing, if you know what I am saying,' said Jeri Thompson, who was in the Pi Beta Phi sorority."

The article quotes Caryn (Greer) Riemer '88, a classmate and sorority sister of Thompson's. "In a positive way, she doesn't care what people think who don't matter," Riemer tells the newspaper. "She's confident in a wonderful way. She adds, "I think it's not surprising that she carved out a career in politics, given her intellect, her ability to network and communicate effectively ... but I don't think we ever imagined that she would possibly be first lady."

Fred Thompson -- a former U.S. Senator from Tennessee who is also a well-known actor -- dismisses criticism that his wife has been overly involved in his presidential campaign. "I wanted her to be my eyes and ears and voice in a lot of things, and she did that," he asserts. "She has certainly been involved and will continue to be involved. But in terms of running the campaign or making decisions or anything like that, that isn't true."

Of Jeri Thompson, Keel reports, "three things emerge from speaking with those who know her and from an exclusive interview she gave the Tennessean:

Read the complete story, headlined "Potential first lady speaks out," at the Tennessean's Web site. A sidebar article can be found here.