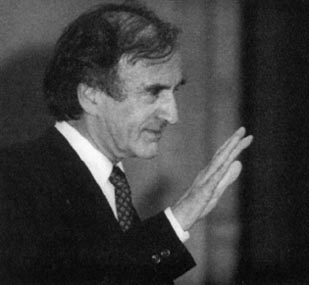 September 14, 2007, Greencastle, Ind. - "During a visit to DePauw University, Elie Wiesel was asked: 'Tell me how you can prevent a future Holocaust?,'" begins an article in today's edition of Colorado's Grand Junction Sentinel. "'Say 'hello' to your neighbor,' the philosopher, author and Holocaust survivor replied," writes Ann Wright in a story that marks the beginning of the Jewish holy days this week.

The story about Wiesel, who visited DePauw as a Timothy and Sharon Ubben Lecturer on September 21, 1989, is relayed to the newspaper by Lewis E. "Buz" Bogage, former rabbi at DePauw. Bogage, who will lead services at the Congregation of Ohr Shalom in Grand Junction, Colorado, says Wiesel's message in Greencastle, while simple, suggests that when it comes to improving the state of the world, "you can do it starting with yourself."

Wright reports, "Bogage [pictured at right], who served as rabbi at various

places across the country and world, received his doctorate from Hebrew Union College in Cincinnati and taught at the University of South Florida, as well as DePauw."

Read the complete text at the Daily Sentinel's Web site.

A summary of Wiesel's speech, "Building a Moral Society," and audio of his presentation can be found in this previous story. A video montage is embedded below.