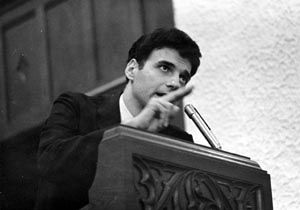 September 11, 1970, Greencastle, Ind. - Environmental hazards are "the chief form of domestic violence in our history" and "an assault on our natural habitat," Ralph Nader told a standing room only crowd at DePauw University today. The consumer advocate spoke on "Environmental Hazards: Man-Made, Man-Remedied" in an address at Gobin Memorial Church.

Technology is among the forces wreaking havoc on the environment, Nader told the audience which packed Gobin Church, and pointed in particular at automobiles. Car crashes have taken more lives than all the wars in which the United States has been involved combined, he stated.

The consumer advocate also attended a luncheon hosted by Sigma Delta Chi, which was followed by a news conference attended by approximately 200 journalists who came for the 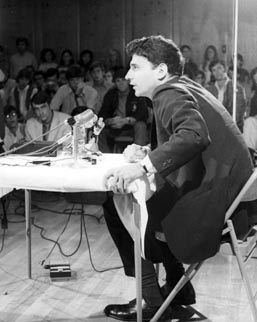 In 1965, Nader wrote Unsafe at Any Speed, a study in which he made the case that many American automobiles were inherently dangerous, especially the Chevrolet Corvair. In part due to Nader's book, Congress passed the 1966 National Traffic and Motor Vehicle Safety Act.

While industries have developed safety devices such as collapsible steering columns, safety windows and seat belts, Nader says consumers deserve, and must demand, more. He is calling on Americans "to demand that technology cease being aristocratic." And safety information, he asserts, must become the key point buyers focus on when buying a vehicle.

Nader also tackled air and water pollution. "Here we are waving the American flag and singing My Country 'Tis of Thee, but we're also creating environmental pollution," he says. There are already high levels of toxic chemicals in our environment, the attorney and activist says, largely due to "an ingenious misuse of modern chemistry."

The speaker pointed out that arsenic is present in many detergents. That means that arsenic-tainted wastewater eventually winds up in streams and rivers and then makes its way back into the water we use for drinking, cooking and washing.

In Nader's view, it is giant corporations that Americans should worry about, not the "far-out, bearded hippies and yippies." He asked, "How much of the hippie-yippie problems can be attributed to this colossal misuse of resources?"

In closing, Nader told his audience of undergraduates that young Americans no longer have the luxury of being students now and citizens later. "The investigative student must involve himself in empirical studies and data collection," he argued, suggesting that students focus on the problems facing their communities and the world at large. This inquisitiveness "will become the norm for the 70s," Nader predicted.