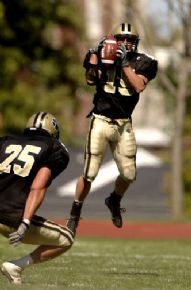 The Jackson Clarion-Ledger quotes Millsaps coach Mike DuBose as saying, "My gut feeling is he'll be OK for Saturday." That newspaper points out that DePauw is 3-0 and 2-0 in SCAC play.

Blackstock Stadium at 1 p.m. If you can't see the action in person, you can listen to the play-by-play live via DePauw student radio station WGRE.