Fitch Named to D3football.com Team of the Week 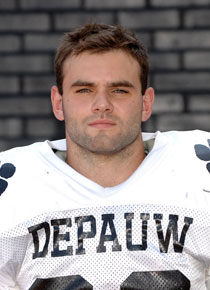 October 24, 2007, Greencastle, Ind. - DePauw sophomore defensive end Alex Fitch has been named to the D3football.com Team of the Week for his performance in the Tigers' 41-40 double overtime win at Colorado College.

Fitch blocked an extra point in the second overtime which helped the Tigers to the eventual 41-40 win on its ensuing overtime possession. He also forced a fumble which the defense recovered at the DePauw 39 with 19 seconds left in regulation and the game tied 27-27.

Fitch totaled six tackles on the afternoon, including three for losses of 10 yards and a six-yard sack. He also broke up one pass.

DePauw returns to action on Saturday, October 27, when it hosts Austin College in the 101 annual Old Gold Day.