"We Have Gone For It," Indiana Gov. Mitch Daniels Tells DePauw Audience 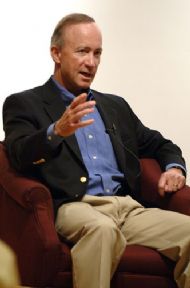 [Download Audio: "Making Things Work" - 183kb] "Here in Indiana, I'm trying to make things work and I'm trying to not be imprisoned by any philosophy except the general belief in the primacy of the individual -- individual freedom," the state's 49th governor, Mitch Daniels, told an audience at DePauw University this afternoon. "We'll just keep callin' 'em as we see 'em, regardless of the subject," he added. Daniels presented the Gertrude and G.D. Crain Jr. Lecture, "You Can't Always Get What You Want," in the auditorium of the Richard E. Peeler Art Center.

In his three years as governor, Daniels -- a Republican who previously served in the administrations of presidents Ronald Reagan and George W. Bush -- has earned a reputation of being 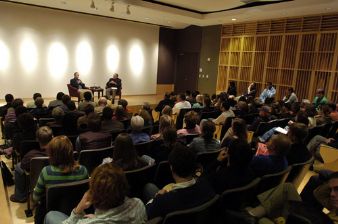 what he promised when he ran for the office: a change agent. He has, among other things, balanced the state budget, leased the Indiana Toll Road for $3.8 billion and is using the funds to finance a flurry of road improvement projects across Indiana, and has reduced state spending.

Yesterday, the governor introduced a proposal that would permanently cap property tax bills while increasing the state sales tax by 1%. The move to cap homeowner property taxes at 1% of a home's assessed value would reduce the average Indiana homeowner's bill by more than a third, Daniels says.

While he's been criticized by some 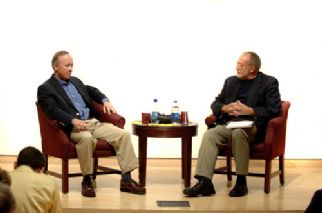 quarters for doing too much, too soon, Daniels says he's running the state exactly as he promised he would during the 2004 campaign.

[Download Audio: "Going For It" - 411kb] "I think any fair assessment is we played with the cards face up, we didn't for a moment conceal from folks that if we were given the opportunity we were people of change and we were gonna bring it. I only ran for the job because I thought there were a lot of things that had been let slide in this state; I was restless watching this state slip behind by every indicator ... We laid it all out there and we've added some things to that agenda as we've gone along, of course, but we have gone for it." 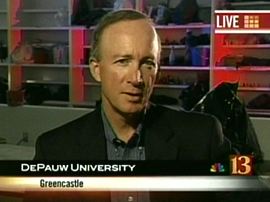 back and fix 'em, but we won't sit still. And I just think it's made for an interesting time in the history of our state."

Today, a news crew from Indianapolis NBC affiliate WTHR was on the DePauw campus to cover Gov. Daniels' appearance. A clip of the lecture, introduced live via satellite from DePauw by reporter Kevin Rader, appeared on the station's 6 p.m. newscast:

Daniels believes the candidates for president -- Republican and Democrat -- have focused on positioning themselves and avoided the "straight talk" that he employed when he ran for governor.

[Download Video: "Straight Shooting" - 1309kb] "I'm still waiting for somebody to say, if we want our nation to be free and prosperous we're gonna have to be really energy independent, and that's 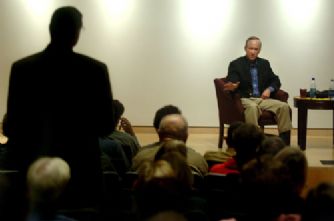 not gonna happen by status quo or by wishful thinking about energy sources that are decades off. How about a carbon tax, a big one?," he asked to applause from some audience members, adding the revenues should be returned "to the working people of the country in reducing taxes on their hard work, either at the payroll or income tax level."

[Download Audio: "On Speaking Out" - 125kb] "I admire anybody -- even if I disagree with them -- I admire people who will say what they think and stand by it even if it doesn't meet universal favor." At this point, Daniels says he supports the candidacy of his longtime friend, Sen. John McCain, who has a history of speaking out, even when it's not politically prudent. However, when pressed by moderator Ken Bode, Daniels said he believes Rudy Giuliani may be in the best position to take the GOP nomination.

Stopping Hillary Clinton from winning the White House looks to be a very difficult challenge, the Republican governor 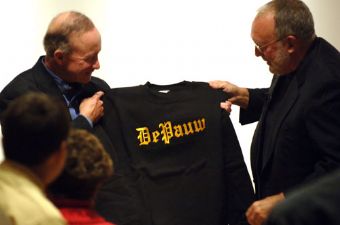 [Download Audio: "Creating a Contrast" - 155kb] "I think to create the kind of contrast that would be necessary for a Republican to somehow eke out this election, I think they're going to have to have a risk-taker and someone who says, 'Look folks, this is what it is.'"

Daniels believes America is prepared to elect a woman president.

[Download Audio: "America is Ready" - 277kb] "If she wins, I will really regret that my party didn't find a female leader first. Margaret Thatcher was elected a long time ago in a country whose politics isn't totally different from ours," the governor declared. "And I think Americans long ago passed the point, and proved it in other offices, where they'll vote for a woman, minorities; thank goodness, I think we're there. But not just for that reason, and not just any person."

As is customary for guests of the Crain Lecture Series, 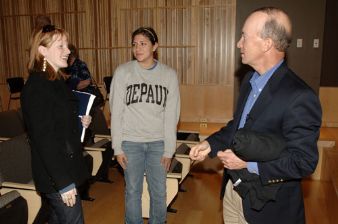 Gov. Daniels was presented with a DePauw sweatshirt at the conclusion of the event, and was heard to ask Bode, Eugene S. Pulliam Distinguished Visiting Professor of Journalism at DePauw, "Where is the Bell game this year?" The professor responded, "Here," to which Daniels said, "It's about time you guys won one, isn't it?" The Tigers will attempt to reclaim the prized Monon Bell for the first time since 2004 on November 10.

Governor Daniels' appearance filled the auditorium. An overflow audience of approximately fifty people watched the event on a television set up outside the venue.

Endowed by Rance Crain, president of Crain Communications and a member of