November 9, 2007, Greencastle, Ind. - "Two giants of small-college athletics are ending their careers this fall," begins today's Indianapolis Star "On Campus" column. "Hanover's Wayne Perry [pictured at left], who has the most victories of any college football coach in state history, will coach his final game Saturday." Jeff Rabjohns also notes, "This past Saturday, Page Cotton ended a 39-year run as the men's soccer coach at DePauw."

The text states, "In his 26th season at Hanover, Perry has a 174-88-2 record. Perry passed Butler coach Tony Hinkle's state record of 165 wins on Oct. 1, 2005. The 1972 DePauw graduate led the Panthers to eight conference titles, nine playoff appearances and all four of the school's 10-win seasons. He plans to remain at the NCAA Division III school in a fundraising position."

Of DePauw's soccer coach, Rabjohns reports, "Cotton went 390-190-33 with the Tigers, including 12-5-1 this fall. His teams had a winning record each of his final 26 years. He led DePauw to eight NCAA Tournament appearances, and he was among the top 10 in 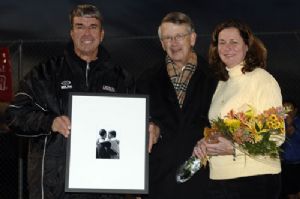 victories among active Division III coaches prior to his retirement. After graduating from Springfield (Mass.) College in the spring of 1969, he took over DePauw's three-year-old soccer program that fall. A kinesiology professor, Cotton remains athletic director at DePauw." (above, l-r: Page Cotton, DePauw President Robert G. Bottoms and Narda Cotton at the coach's final soccer game, November 3)