November 17, 2007, Greencastle, Ind. - "A leading voice for economic opportunity," Vernon E. Jordan is one of five inductees into the Washington, D.C. Business Hall of Fame. Jordan, senior managing director of investment bank Lazard Fréres and 1957 graduate of DePauw University, will be inducted in ceremonies on Tuesday, November 27.

"The first time he walked into a corporate boardroom, Jordan was wearing a white jacket, working as a waiter for his mother's catering company," reports Washingtonian magazine. "The next time, he was wearing a business suit and making the case for increased opportunities for minorities as president of United Negro College Fund. He did the same as executive director of the National Urban League." 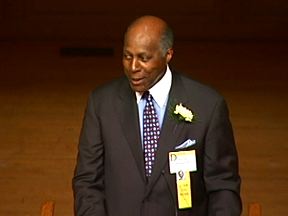 Jordan tells the publication, "I never had a job where I didn't like what I was doing. Wherever I was working, I gave that stewardship my very best."

The magazine adds, "Working that way led to more and bigger opportunities -- although Jordan hasn't applied for a job since he graduated from DePauw University and sought work driving a trolley in Chicago before starting Howard law school." The text details his many successes, pointing out that he "served on Bill Clinton's 1992 transition team and remains one of Clinton's closest friends and advisers." Jordan also serves as president of the Economic Club of Washington, 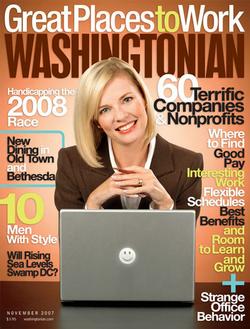 serves on several corporate boards and is senior counsel at Akin Gump Strauss Hauer & Feld. He authored the memoir, Vernon Can Read!.

The Washington Business Hall of Fame was founded in 1988 by the Greater Washington Board of Trade and the Washingtonian to benefit Junior Achievement of the National Capital Area.

At June's Alumni Reunion Weekend celebration, Vernon Jordan told his 50th reunion class, "With all that we have accomplished, with all the experience and wisdom and smarts, we have a duty and a responsibility to contribute more to DePauw, to America, and to the world." Read more about Jordan, adviser to Presidents Clinton and Carter and former president of the National Urban League, and access audio of his entire June 9 speech, in this previous story.