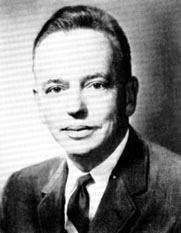 January 4, 1967, Greencastle, Ind. - Warren J. Reynolds, a 1939 graduate of DePauw University, has been named publisher of Parade, a Sunday newspaper magazine. The publication has weekly distribution of nearly 13 million copies through 77 papers.

Reynolds joined Parade in 1947 as a member of the Chicago sales staff and became manager of that office in 1954. He transferred to New York as assistant publisher in 1960, was elected to the board of directors in 1962, and the following year was appointed vice president.