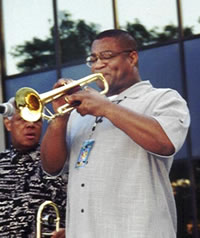 December 26, 2007, Greencastle, Ind. - "Trumpeter Pharez Whitted adds fire to the front-line on four tracks" on a new concert DVD, Ari Brown: Live At The Green Mill, reports All About Jazz. Whitted is a 1982 graduate of DePauw University, and as the review of the disc asserts, "The veteran Chicagoan is a powerful presence on the bandstand."

John Barron opines, "Whitted blows with strength and determination on 'Richard's Tune' and 'Waltz of the Prophets.' The trumpeter plays an alluring muted solo on 'Kylie's Lullaby.' No mute, however, can hold back the fiery compulsions embedded in Whitted's lines."

Pharez Whitted, is director of jazz studies at Chicago State University and has an extensive and impressive performance résumé. The artists he has worked with include Bradford Marsalis, George Duke, John Mellencamp, Lou Rawls, The O'Jays, The Dells, and the Temptations.

Whitted also performed on TV's Arsenio Hall Show, and has been featured on the Billboard Music Awards, MTV and BET. As a solo artist, he has released two compact discs on the Motown/Mojazz record label.

After graduating from the DePauw University School of Music, Whitted earned a master's degree from Indiana University.