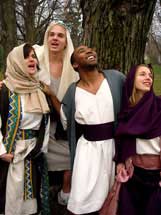 January 22, 2008, Greencastle, Ind. - DePauw Theatre will present the popular musical, Children of Eden, January 31 through February 3. Performances of the heartfelt and humorous look at the pleasures and pains of parenting can be enjoyed Thursday, Friday and Saturday at 7:30 p.m. and Sunday at 2:30 p.m. in the Green Center for the Performing Arts' Moore Theatre.

Children of Eden is based on the Book of Genesis. Exploring the themes of parents and children, faith, and perseverance, the play’s first act is devoted to the stories of Adam and Eve, and Cain and Able, while the second act is devoted to the experiences of Noah and his family with the flood. A deeply humanistic work, Children of Eden appeals to bothreligious and agnostic audiences, ultimately delivering a bittersweet but inspiring message: the hardest part of love ... is letting go.

Music and lyrics for the production were written by 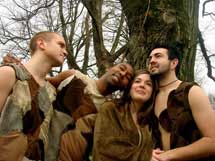 Stephen Schwartz, known throughout the world as the composer and lyricist for Broadway hits such as Godspell, Pippin and Wicked. The melodic, energetic score is a mix of pop, folk, rock, reggae, gospel, Broadway and powerful choral moments.

Children of Eden is one of the top 20 most frequently licensed musicals by Music Theatre International, which is unusual for a show that has never played on Broadway. The production’s 1991 London debut coincided with the start of the Gulf War and one of the worst slumps in West End theatre attendance in history. As a result, Children of Eden never gained a mainstream audience or a Broadway invitation. The show may soon have its day, however, as it was recently announced that plans are in the works to bring Children of Eden to Broadway for the 2008-09 season. 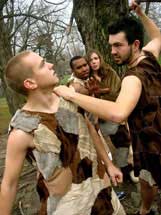 Directed by Tim Good, associate professor of communication and theatre, the production is the culmination of a DePauw University 2008 Winter Term project. Every other year, DePauw Theatre devotes the month-long Winter Term to the creation of a production.

" I’ve enjoyed being able to participate in theatrical productions even though I’m not a theatre major," says junior Brandon Piper, who portrays Adam and Shem. "I also enjoy committing to a production during Winter Term without the other activities such as classes and extracurriculars. It’s great being surrounded by a diverse group of individuals who are equally committed to making the show a success."

More than 50 students are taking part in the production of Children of Eden.

Tickets are $3 for students and $6 for adults, and are available at the Green Center box office. Information and reservations are available by calling (765) 658-4827 or e-mailing greencenter@depauw.edu.

Still available for purchase are DePauw Theatre patron passes, which provide five tickets for the price of four. The passes are available at both student and adult price levels. For information, reach the contacts listed above.