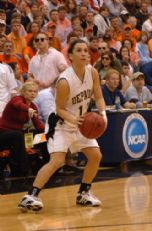 January 22, 2008, Greencastle, Ind. - "DePauw's Cassie Pruzin (Crown Point) moved up to third place on the all-time list for three-pointers, two swishers against Colorado College boosting her career total of 122," reports today's edition of Indiana's Gary Post-Tribune. "The junior guard is also ninth with a .376 percentage from the arc."

Pruzin knocked down another trey in Sunday's 69-64 Tiger victory at Austin.  The team -- the defending national champion -- is 13-3 overall and 6-0 in the Southern Collegiate Athletic Conference and ranked #13 in NCAA Division

Both the women's and men's teams are back in action Friday night at home versus Hendrix College.  Get the latest information at the athletics Web page.