February 12, 2008, Greencastle, Ind. - "We're putting too much into the ocean and taking too much out," says Wallace J. Nichols, senior scientist at the Ocean Conservancy and 1989 graduate of DePauw University. Dr. Nichols is one of nine "eco-all-stars" cited in the March issue of Outside magazine, which hits newsstands today. Others on the list include actor Edward Norton and climatologist Heidi Cullen.

Nichols elaborates: "Putting too much in? Go a week without creating plastic waste. Taking too much out? Check out ShrimpSuck.org." The magazine notes, "The site, started by Nichols in 2007, urges consumers to stop eating the country's most popular seafood, which is typically caught using turtle- and dolphin-killing nets. It's one of many issues Santa 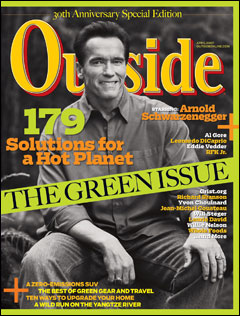 Cruz, California-based Nichols has tackled while juggling research (he was the first to discover that Pacific loggerheads migrate almost 7,500 miles to the coast of Japan) and working with more than a dozen conservation groups."

"Sea turtles are sentinels for the ocean," says Nichols, who goes by his middle initial. "They're my portal into everything."

J. Nichols is also president of the International Sea Turtle Society, and a researcher for the California Academy of Sciences. He is seen in Leonardo DiCaprio's documentary, The 11th Hour and returned to campus in the fall to participate in DePauw Discourse.  A summary of that session -- which includes video and audio clips as well as photographs -- can be found here.