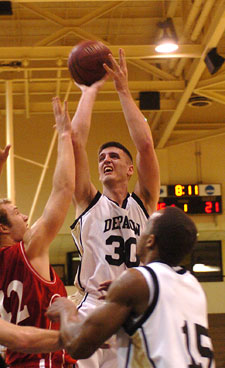 February 12, 2008, Greencastle, Ind. - Senior Stephen Schott has been named the Southern Collegiate Athletic Conference Men's Basketball Player of the Week for games played February 4-10. The honor was the third of his career.

Schott averaged 23.5 points and 8.5 rebounds per game as the Tigers picked up home wins against Rhodes and Birmingham-Southern over the weekend.

He currently ranks 10th in DePauw history with 1,349 career points and third with 789 rebounds. Those totals ranks 24th and third in SCAC history, respectively.

The Tigers conclude the home portion of the regular season schedule on Saturday, February 16, when they host third-ranked Centre at 3 p.m.