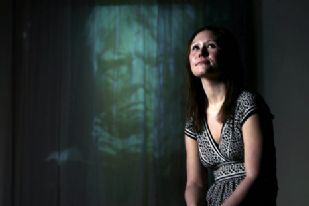 February 13, 2008, Greencastle, Ind. - "Growing up in Alton, Ill., Ashley Holland, 24, enjoyed visiting her grandparents in Oklahoma," begins an Indianapolis Star profile of the 2005 DePauw University graduate. "She knew then that she was a descendant of the Cherokee nation of Oklahoma, but it wasn't until she began graduate school that she truly connected with her heritage." Holland is assistant curator of contemporary art at the Eiteljorg Museum of American Indians and Western Art in Indianapolis. (photo: Danese Kenon/Indianapolis Star)

"After graduating from DePauw University, Holland worked part time at The Children's Museum and the Indianapolis Museum of Art while completing her master's degree in museum studies," writes T.J. Banes. "Among her favorite artists are Rick Bartow, a Wiyot of Northern California, who is known for his pastel-on-paper etchings of deer, coyote, ravens and hawks; and Shelley Niro, a Mohawk of the Bay of Quinte, who is known for her films and photography."

"Through my job I've been able to meet some 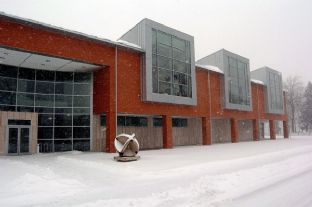 of these artists," says Holland, who majored in religious studies and art history at DePauw. "They've influenced me and shaped where I want my career to go."

A new exhibition of photographs of American Indians, "Our People, Our Land, Our Images," is Holland's latest project. "I'd like to stay involved in promoting and creating a greater knowledge of Native American art," she says. "Sometimes people overlook it because they think it's a niche that only certain people can enjoy."

Read the complete text at Indy.com.