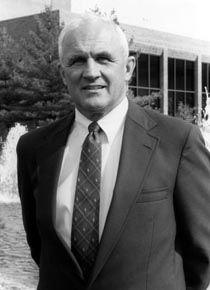 February 6, 1987, Greencastle, Ind. - Ted Katula and Page Cotton have been promoted to new positions within the athletic department at DePauw University.

Katula (pictured at left), presently director of student activities, will be the new athletic director. Cotton (seen below right), currently professor of health, physical education and recreation and the University's tennis and soccer coach, will become the new director of recreation at DePauw.

Both appointments are effective June 30. Tom Mont, currently chairman of the department of health, physical education and recreation and director of athletics, is retiring. A former National Football League player, Mont joined DePauw in 1959 after serving 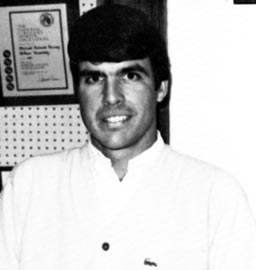 as head football coach at the University of Maryland.

Katula joined the DePauw physical education and coaching staff in 1959. He has coached -- at various times -- football, baseball, wrestling and golf. He later was named director of student activities. He has been involved in assisting many activities at DePauw through the years, including alumni affairs.

Cotton joined the athletic department in 1969, after graduating from Springfield (Massachusetts) College. He received his graduate degree at DePauw and has served as soccer, tennis and basketball coach. Cotton's record as DePauw's soccer coach is 138-95-12 and he has been responsible for promoting the game statewide.