February 22, 2008, Greencastle, Ind. - DePauw Opera will present the operatic farce The Abduction of Figaro at 7:30 p.m. February 28 through March 1, with a 2 p.m. matinee on March 2. The production will be staged in the Green Center for the Performing Arts' Moore Theatre.

The Abduction of Figaro by fictitious composer P.D.Q. Bach (Peter Schickele), was written in the late 1980's and makes fun of many operatic conventions, combining the music from several operas, as well as adding in a little rock and roll mashed with other classical and popular music. The story is one of comedic incidents and surprising twists, including the invasion of the plot by a pirate.

Directed and produced by Keith Tonne, associate professor in the DePauw University School of Music, the production is the cumulative work of nearly 100 students, which includes a double cast of singers and members of the DePauw Symphony Orchestra, conducted by Orcenith Smith. The cast includes seniors Stacey Sands, Leah Souder, James Patton, Jennifer Smith and Catheryne Shuman. 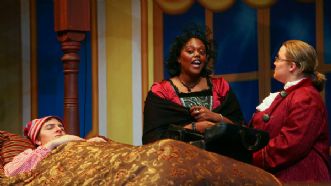 Tickets for the production are $3 for students and $6 for adults. They are available for purchase at the Green Center's box office, Monday through Friday from 12:30 p.m. to 4:30 p.m. and one hour prior to show time.

Information and reservations are available by calling (765) 658-4827 or emailing greencenter@depauw.edu.