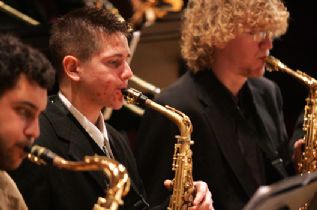 April 2, 2008, Greencastle, Ind. - The DePauw University Jazz Ensemble, directed by Randy Salman, will present its final concert of the semester this Sunday, April 6, at 7:30 p.m. The free concert will be held in Thompson Recital Hall of the Judson and Joyce Green Center for Performing Arts.

The 17-member Jazz Ensemble is made up of students from DePauw's School of Music and College of Liberal Arts. They play a series of formal concerts in the Green Center for the Performing Arts and informal concerts at the Walden Inn. The public is invited to join the Jazz Ensemble Sunday as they swing out the semester and pay tribute to graduating seniors.