May 12, 2008, Greencastle, Ind. - Carl A. Huffman, professor of classical studies at DePauw University, is the recipient of a 2008-09 fellowship from the American Council of Learned Societies (ACLS) to support his sabbatical. He has also been awarded a visitorship in the School of Historical Studies at the Institute for Advanced Study for spring 2009.

The ACLS study of Dr. Huffman -- Edgar L. Minar Professor of Classical Studies and Robert Stockwell Professor of Greek Languages at DePauw -- will explore "Aristoxenus on the History of Greek Philosophy and the Biography of Greek Philosophers: Pythagoreanism, Pythagoras, Socrates and Plato." More than 1,000 scholars applied for ACLS Fellowships; Huffman is one only 65 to receive the awards.

"This is a study of the fourth-century B.C. Greek philosopher Aristoxenus as a historian of philosophy and biographer of philosophers," explains Professor Huffman. "Aristoxenus is a crucial source for Pythagoras and early Pythagoreanism and wrote the first lives of Socrates and Plato. The study provides a new edition of the Greek fragments of Aristoxenus' works in this area, English translations, and 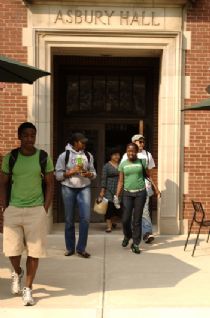 commentary on each fragment. Reevaluation of Aristoxenus' evidence will provide insight into three of the most important figures in the western tradition: Pythagoras, Socrates and Plato. The study also considers Aristoxenus as a member of Aristotle's school and, in particular, his role in the invention of the genre of biography. No book on Aristoxenus as a historian of philosophy and biographer exists in any language."

During the tenure of his ACLS Fellowship, Huffman will be a visitor in the School of Historical Studies at the Institute for Advanced Study in Princeton, New Jersey (January - August 2009).

Learn more about Carl Huffman, author of Archytas of Tarentum: Pythagorean, Philosopher and Mathematician King, in this previous story.