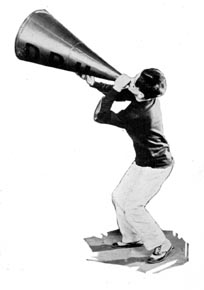 November 19, 1921, Indianapolis, Ind. - Bragging rights in the football rivarly between DePauw University and Wabash College returned to the men from Crawfordsville this afternoon, as the Little Giants handily defeated the Tigers, 22-0 at Washington Park in Indianapolis. A crowd estimated at more than 8,000 witnessed the game, which was played on a muddy field after a week of rainy weather.

Coach Fred Walker and his DePauw squad early fell behind early in the contest, when Wabash's Alonzo Goldberry passed to George Stasand for a touchdown. Elmer Roll later added two more six-point tallies and the halftime score was 22-0, with the second stanza a defensive struggle. Wabash collected 14 first downs on the afternoon to DePauw's one, and it was picked up on a Little Giant penalty.

DePauw winds up the 1921 season with a 4-3 record, while Wabash takes a 7-1 mark into its final game with Marquette.

View a "Monon Memory" of the 1921 DePauw-Wabash football contest here: