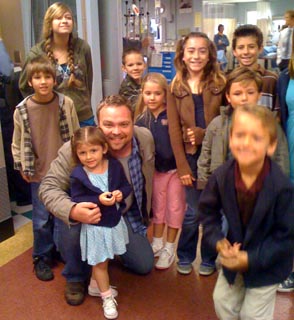 April 22, 2008, Greencastle, Ind. - Eight may have been enough for TV dad Dick Van Patten, but actor Drew Powell outdoes him by five in Thursday night's edition of NBC's ER. Powell, a 1998 graduate of DePauw University, portrays the father of 13 children in the episode, "Truth Will Out," which airs at 10 p.m. Eastern time. (photo shows Powell on the ER set with his "brood")

"I have to say, when they herded through all 12 of the live kids (the 13th was an amazingly lifelike infant doll), 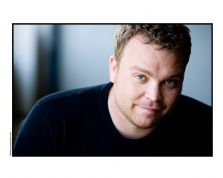 I had to catch my breath," Powell reports. "How do you feed that many kids? And what about bathing? I was sweating just thinking about it. Anyway, the episode is a good one and it might be worth checking out."

A Media Fellow at DePauw, Drew Powell was recently featured in the motion pictures 1408 (which starred John Cusack and Samuel L. Jackson) and The Marine. Other roles have include a featured part in the PAX show The Ponderosa, and he was a recurring character in the FOX series Malcolm in the Middle. Powell also appeared on CBS' Cold Case and NBC's The Office.