DePauw and Putnam County Prepare for 2008 Relay For Life 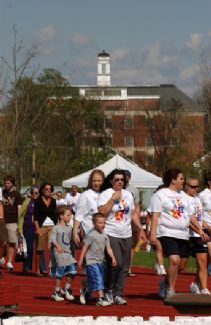 April 30, 2008, Greencastle, Ind. - This weekend, DePauw University students, faculty and staff will join forces with members of the Putnam County community to raise funds for the fight against cancer. With three days remaining before 2008 Putnam County Relay For Life begins, 165 teams and 1,383 individuals are signed up to participate and already more than $30,500 has been collected.

The 24-hour fundraiser for the American Cancer Society begins at noon on Saturday, May 3, at DePauw's Blackstock Stadium. The 2008 theme is "Celebrate. Remember. Fight Back."

"Relay for Life allows me to contribute back to the community, as well as gives me the support to be strong for both of my grandparents [who are] dying of cancer," says DePauw junior Meagan Brady, who serves on the event's steering committee. "I love to see the community come together as one to help eliminate cancer for everyone," she tells The DePauw. 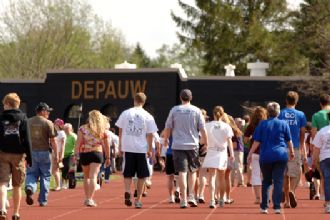 At this online page you can learn more about the 2008 Relay, register for the event and make a donation. You may send an e-mail to relayforlife@depauw.edu.

Also available is a short video clip of the 2007 Putnam County Relay For Life: