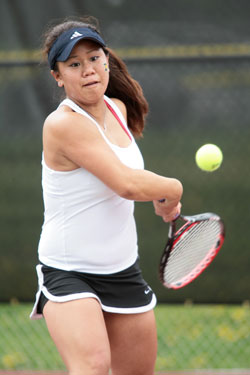 May 22, 2008, Greencastle, Ind. - DePauw's Janelle Arita has earned special honors from the Intercollegiate Tennis Association as she was named the organization's Division III Rookie of the Year.

Arita, an all-Southern Collegiate Athletic Conference selection, Arita was 26-9 in singles including a 19-6 record at the number-one spot and also posted a 26-6 doubles mark. She earned a spot in the NCAA Division III Singles Championship and bowed out in a three-set, first-round match.