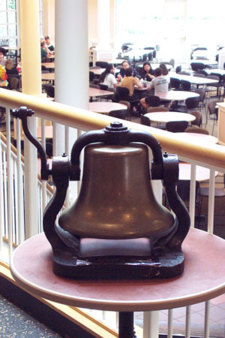 May 22, 2008, Greencastle, Ind. - "DePauw University, after earning spring sports titles in men's and women's tennis as well as softball, pulled away for a 42.5 point victory over second-place Trinity University in the race for the 2007-08 SCAC President's Trophy," begins an announcement from the Southern Collegiate Athletic Conference. "It is the third consecutive all-sports trophy win for the Tigers." DePauw totaled 902.5 points to runner-up Trinity's 860 points.

The symbol of conference supremacy is the 300-pound railroad bell which was donated to the SCAC by the Norfolk and Western Railroad. This bell, the "President's Trophy", is a rotating award and

goes to the school with the best overall sports record for the year. (top photo: a file shot of the President's Trophy on display in DePauw's Memorial Student Union Building)