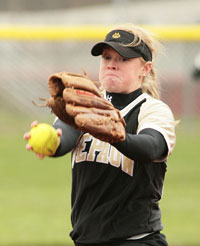 June 4, 2008, Greencastle, Ind. - "DePauw University pitcher Megan Soultz, a sophomore from Carmel, has been named one of 11 finalists for the Honda Division III Collegiate Woman Athlete of the Year," reports Indiana's Noblesville Daily Times. "An ESPN The Magazine softball academic all-district selection, Soultz also is a first team All-America choice and the Southern Collegiate Athletic Conference Pitcher of the Year after posing a 36-4 record with a 0.98 ERA." The winner of the Honda award will be announced June 25.

Soultz led all of Division III in victories "and she struck out a DePauw and conference record 260 batters in a record 265.1 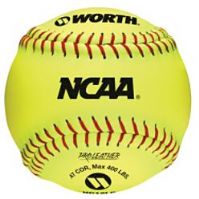 innings," notes the newspaper. "Soultz also established school and conference records for shutouts (15), games and games started (44) and complete games (33). Her career 0.96 ERA also is tops in DePauw history as are her 55 wins, 24 shutouts and 418 strikeouts."

Read more at the newspaper's Web site or at the Tiger softball team's official online page.

Liz Bondi, a 2007 DePauw graduate, was the 2007 Honda Division III Athlete of the Year.