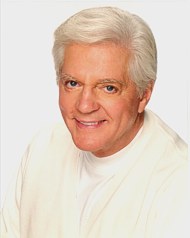 June 16, 2008, Greencastle, Ind. - "The charismatic Bill Hayes takes the stage as Billy Flynn" in Sarasota, Florida's Golden Apple Dinner Theatre production of Chicago. A review in the Bradenton Herald notes that the work of Hayes -- a 1947 graduate of DePauw University -- is "unlike previous portrayals of Flynn by [Jerry] Orbach or [Richard] Gere, and yet it works well within the context of a vaudeville show. He has a comfortable, easy rapport with the audience, delivering his lines seemingly off the cuff. While onstage, he orchestrates the action, and he can still hold a note," writes Mike Nolan.

The review -- which notes that Hayes gained fame on TV's Days of Our Lives -- asserts, "It's a very sexy show anchored by a great chorus." The production

A Rector Scholar at DePauw, Bill Hayes authored Like Sands Through the Hourglass with his wife and Lives co-star, Susan Seaforth Hayes. His resume includes numerous Broadway productions and his version of The Ballad of Davy Crockett was America's #1 record in March and April of 1955, selling more than three million copies.

In 2003, Hayes helped Corey Brackney, then a DePauw junior, get an internship on his NBC soap opera. Learn more in this previous story.