Indiana Must Get Moving Toward Mass Transportation, Students Write in Indianapolis Star 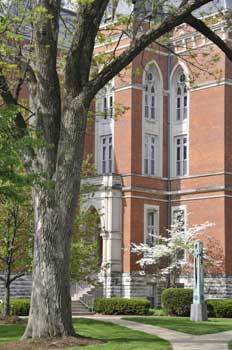 July 2, 2008, Greencastle, Ind. - "In his June 22 column, Star Editor Dennis Ryerson presented 10 reasons why mass transportation in Central Indiana would not succeed," begins a letter by four DePauw University students, which is published in today's edition of the Indianapolis newspaper. "Here are our counterpoints for why Indianapolis will seize the opportunity to invest in mass transportation." Senior Elizabeth Lunik, junior Tiffany Nichols, and sophomores Anthony Baratta and Craig Melancon are identified by the paper as "members of DePauw University's Environmental Policy group."

They argue, "Although it will take patience for the mass transit systems to be built, we know there has to be a starting point and that waiting is not the answer. A June 25 report by the Energy Information Administration found that world energy demand will grow by 50 percent over the next two decades and that oil prices could rise to $186 a barrel. Even if Americans begin to drive less, the modernization of China and India will offset reduction, keeping fuel costs high and creating a continued demand for mass transportation."

The letter concludes, "Clearly, a mass transportation system would benefit Indiana greatly. We encourage Indiana citizens to use their public bus system, debate and discuss the complexities of mass transit, and let their legislators know these facts as they allocate funding during the General Assembly in January."

Read the submission in its entirety at College News.org.