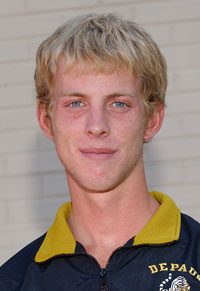 July 2, 2008, Greencastle, Ind. - Daniel Bretscher, a 2006 graduate of DePauw University, won Sunday's MedExpress Spirit of Morgantown Half Triathlon. "Competing in just his third half-ironman (1/2 mile swim, 56 mile bike and 13.1 mile run) as a professional, Bretscher came away with his first pro victory on a day when surviving meant just as much as winning," reports the Dominion Post of Morgantown, West Virginia.

The story by Justin Jackson notes that Bretscher finished with a time of four hours, five minutes and 23 seconds. The win earned him $4,000.

Justin Jackson writes, "A graduate of DePauw (Ind.) University and a native of Greencastle, Ind., Bretscher grew up with a swimming background [his mother, Mary, is coach of women's swimming

and associate professor of kinesiology at DePauw]... He ran track and cross country at DePauw, but didn't compete in his first triathlon until after college. He turned pro just this year."

Access the article, which includes a color photo of Bretscher crossing the finish line, by clicking here. View the official results here.