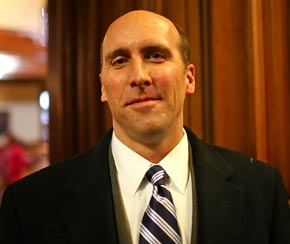 July 7, 2008, Greencastle, Ind. - A new chapter in the 171-year history of DePauw will be celebrated on Friday, October 10, as the University community and its friends gather for the inauguration of the institution's nineteenth president, Brian W. Casey. The ceremony, which will be part of this year's Old Gold Weekend, begins at 4 p.m. in Holton Quad (in the event of rain, the proceedings will take place in the Lilly Center).

The program will feature remarks by Robert J. Zimmer, president of the University of Chicago, as well as Dr. Casey's inaugural address.

Brian Casey assumed the presidency of DePauw on July 1. His appointment was announced in February after a nine-month international search for the University's first new leader in 22 years. Dr. Casey comes to Greencastle from Harvard University, where he was associate dean for academic affairs in the faculty of arts and sciences. He succeeds Robert G. Bottoms, who has led DePauw since 1986 and, as president emeritus, becomes director of the Janet Prindle Institute for Ethics.

"It is with great excitement and anticipation that we begin the preparations for Dr. Casey's inauguration," says R. David Hoover '67, chair of DePauw's Board of Trustees. "We'll have more details coming shortly about the plans for the weekend, which should be quite memorable. As so many in the DePauw community have already expressed their fond feelings for Dr. Casey, 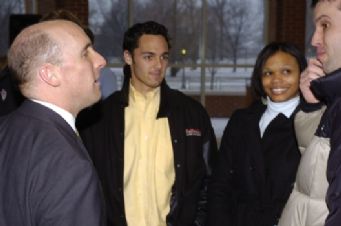 we want to make certain they're aware of the date and know that we look forward to seeing them on October 10."

Brian Casey's arrival on campus was covered by NPR and PBS affiliates from Bloomington, Indiana.

On June 14, he delivered a welcoming address at DePauw's Alumni Reunion Weekend celebration. A summary -- including video and audio of Casey's remarks -- can be found here and the complete address can be read at College News.org.