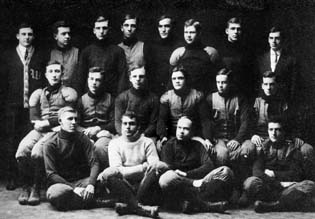 November 20, 1908, Crawfordsville, Ind. - The 350 DePauw University students who made the train trip to Wabash College today for the renewal of the two schools' football rivalry returned to the Greencastle campus disappointed after a hard fought, 12-0 loss to the Little Giants. DePauw held the home team scoreless through the first half, but two touchdowns by Wabash's James "Herc" Stiers decided the affair.

The DePauw football season ends with a 4-3 record. The team's previous losses were to Indiana and Purdue universities. Wabash improves to 2-5 and still has a game remaining versus the University of Nebraska.

View a "Monon Memory" of the 1908 clash between DePauw and Wabash -- featuring historic photos -- here:

roster of the video clips -- written, produced and narrated by 1982 DePauw graduate Ken Owen -- can be accessed by clicking here.

For comprehensive information on one of America's greatest and longest-running college football rivalries -- which in 1932 introduced a 300-pound locomotive bell as its prize -- visit the Monon Bell Web page.