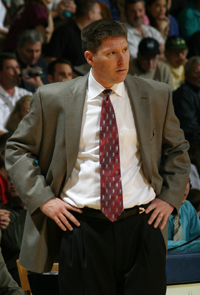 July 24, 2008, Greencastle, Ind. - "Wright State University has awarded a new six-year contract to men's basketball coach Brad Brownell," according to a report this afternoon from Dayton's WHIO-TV. "The new deal signed by Brownell extends his contract with the University through the 2013-14 season." The story notes that Brownell "earned his bachelor's degree from DePauw University in 1991."

Brownell is 44-20 in two years at Wright State and has averaged more than 21 wins annually in his six years as a Division I head coach. He has led three teams to NCAA Tournaments, including the 2007 Raiders, who had a 23-10 record. Brownell was Horizon League co-Coach of the Year last season and has a 127-60 record as a head coach.

"Brad has done an outstanding job in a short period of time," declares Bob Grant, athletic director at Wright State. "His leadership and commitment to Wright State and our student-athletes have led to unparalleled prosperity on the court as well 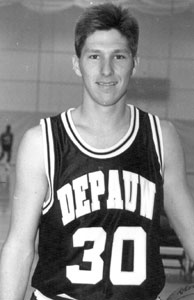 as in the classroom and in the community. His record of success ranks among the top coaches in the nation and I am certainly pleased to have him leading our program and I know our fans feel the same." (at right: Brownell in his playing days at DePauw)

"My family and I are grateful for the confidence and support shown by the University and we hope we can build on the success we have established," says Brownell, who was a history major and basketball standout at DePauw, leading the Tigers in assists for three seasons and played in the Division III national championship game as a junior. "My staff and I will continue to work hard to make this a top program in the league."

Read more at the television station's Web site or in the Dayton Daily News.

A previous story on Brad Brownell can be found by clicking here.