July 27, 2008, Greencastle, Ind. - "Teens may want to look into Here Lies the Librarian by Richard Peck, also a Newbery Award-winning scribe," writes Shannon Schinagl in the West Seattle Herald. In the book by Peck, a 1956 graduate of DePauw University, "Fourteen-year-old Peewee McGrath cannot believe the upheaval in her small town when four young librarians move in."

Schinagl, who is a children's librarian, cites Peck's book among works that defy the stereotype of librarians. "Sensible shoes. Hair in a bun. Glasses perched on the tip of a nose. Tweed suits. Do you recognize the occupation? Shhhhh! Whisper the answer! You're in the library! Yes, librarians have been battling this stereotype for years. Thankfully, books are helping us change our image." 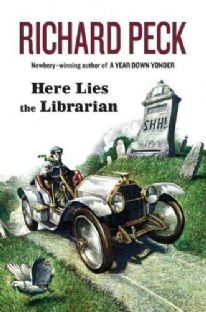 The Washington Post calls Peck "America's best living author for young adults." He received the National Humanities Medal in 2002 and was honored last year with the Indianapolis-Marion County Public Library's Kurt Vonnegut Jr. Award for Literature. Peck was also the 2002 winner of the Chicago Tribune Prize for Young Adult Fiction, and the 1990 recipient of the prestigious Margaret A. Edwards Award, sponsored by the Young Adult Library Services Association of the American Library Association in cooperation with School Library Journal. He has authored more than 30 books, including the Newbery Award-winning A Year Down Yonder.

In a 2001 interview, Peck discussed his DePauw experience. Learn more in this previous story.