Newest Venture of Bill Rasmussen '54 an "Extension" of His Brainchild, ESPN 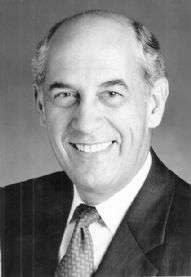 August 2, 2008, Greencastle, Ind. - "This is really an extension of what ESPN was," says the man who co-founded the popular network, 1954 DePauw University graduate Bill Rasmussen. The entrepreneur and his latest venture, College Fanz Sports Network, are featured in the Courier-Post of Cherry Hill, New Jersey.

"Back in the 1970s, there were probably 25 major (college) football games televised the whole year," Rasmussen recalls. "And so ESPN came along and pushed a lot of information out to sports fans. And today, the fans are taking over. The fans want more. From little schools to big schools, they're enthused. It doesn't matter if it's a small school in Wyoming. Those kids are competing just as hard as kids at USC. So we wanted to give those fans the opportunity to keep up with their schools and have a voice." 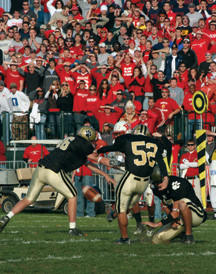 "We had no idea how big ESPN could become and how fast it could grow," Rasmussen states. "And I think that is what's going to happen with College Fanz. A year from today, after another academic cycle and another round with the sports information directors (SIDs), we could be halfway to our goal of having every SID signed up for the site, so we can have every single school across the country reporting live scores for every sport. I have no doubt we're going to get there."

Read the story in its entirety at the Courier-Post's Web site.

Learn more about Bill Rasmussen, who has been called "the father of cable sports" by USA Today, in this recent article.