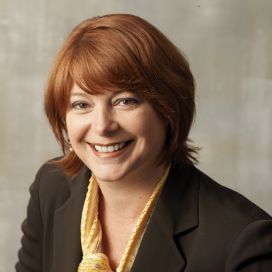 Croal writes, "Yes, the Halo 3s and Call of Duty 4s continue to sell exceedingly well. But it's titles like Wii Play and Guitar Hero III whose appeal to nontraditional gamers have made them the envy of rival videogame publishers. The fact is that when you walk into a Circuit City or a Wal-Mart, the games you're most likely to see these days are ones that will actually hold the interest of a nongeek. That's not by accident: games are increasingly being crafted with you, dear 'average' reader, in mind. Several publishers have created separate divisions for these 'casual games,' as products aimed at the vast middle are known in the business."

Kathy (Patterson) Vrabeck was appointed to her current post in June 2007. She previously served as president of Activision Publishing and has been named on the Hollywood Reporter's list of the "100 Most Powerful Women in Entertainment." Learn more about her by clicking here.