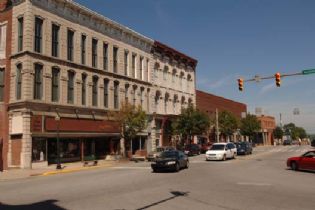 August 13, 2008, Greencastle, Ind. - DePauw President Brian W. Casey and Jeffrey M. McCall, professor of communication and 1976 graduate of the University, were among the panelists at yesterday's first-ever Greencastle Community Summit. Drs. Casey and McCall discussed campus-community relations with Greencastle Mayor Sue Murray and Jeff Pittman, chancellor of the Wabash Valley Region of Ivy Tech Community College, at the session. The summit was hosted by DePauw's Janet Prindle Institute for Ethics.

executive director of the Indiana Rural Development Council, also addressed the approximately 100 people who attended the event, which was titled "Community Forward."

Mayor Murray called the sessions "a good first step toward getting ideas in place to take us where we want to go." She tells Greencastle's Banner-Graphic, "Everyone had to take time away from work and from their busy schedules to give of themselves for this, and it was so wonderful of them to do it. We really should celebrate a community that is so giving."