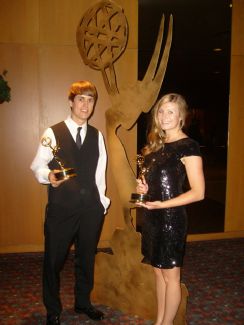 Dinkel (pictured at right), who anchors News 10 at Midday and serves as assistant news director at WTHI-TV in Terre Haute, Indiana, was was honored along with chief photographer and 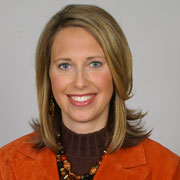 assignments editor Mike Latta for their series, "New Day, New Way." It was a winner in the "Feature News Report - Series" category.

"This is a great award for the entire station," says Todd Weber, vice president and general manager of WTHI-TV. "It's a privilege to be welcomed into our viewers homes each and every day, but to be honored by our peers is not only humbling, but a true testament to the dedication and hard work of our employees."

Ohs (who won two Emmys at the 2007 regional awards presentation) and Levy took home an Emmy in the "Advanced Media: Public/Current/Community Affairs" category for their political parody music video, "American Rhapsody." Based on the Queen 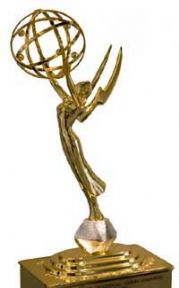 classic, Bohemian Rhapsody, the clip was born of Levy and Ohs' claimed "apathy-turned-passion" about the upcoming presidential election.

Ohs was also nominated, but did not win, in the "Education/Schools - Program" division.

The duo produced the video under PROJECTMILL, their co-founded, Cincinnati-based creative collective. You can view the video at YouTube.com.