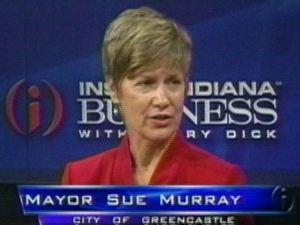 [Download Video: "A Long and Important Relationship" - 1311kb] "DePauw fortunately chose Greencastle as a place to study way back in the 1830s, and to build their campus," Greencastle Mayor Sue Murray tells Inside Indiana Business with Gerry Dick. Murray appeared on the statewide television program over the weekend to discuss "Community Forward," Tuesday's first-ever community summit in Putnam County. Among the topics she discussed was the importance of building upon the long relationship the city and college share.

"The city of Greencastle incorporated in 1849, so we've been growing up together but we still have some opportunities to make that relationship a stronger one," the mayor stated.

President Casey and Jeffrey M. McCall, professor of communication and 1976 graduate of the University, were among the panelists at August 12's "Community Forward" summit. The event's areas of focus also included an analysis of the local economy and the county's assets.

A complete video of Sue Murray's appearance on Inside Indiana Business, which was part of the "Around Indiana" segment, is available on the program's Web site.

Learn more about the community summit in this story.