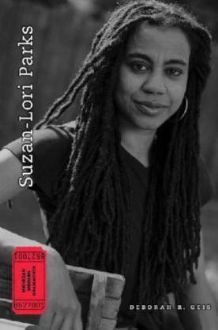 September 17, 2008, Greencastle, Ind. - Deborah R. Geis, associate professor of English at DePauw University, is the author of Suzan-Lori Parks. The book is published by the University of Michigan Press as part of its Michigan Modern Dramatists series, which "offers the theatergoer concise, accessible, and indispensable guides to the works of individual playwrights, as interpreted by today's leading drama critics."

Parks is a Pulitzer Prize-winning playwright who has been called "one of the most important dramatists America has produced" by Tony Kushner, author of Angels in America. Last year, her 365 Plays/365 Days was produced in more than 700 theaters around the world. She has been named one of TIME magazine's "100 Innovators for the Next New Wave" and is a recipient of the MacArthur Award.

The new book examines Parks' dramatic works, "taking a close look at her major plays and placing them in context," according to a synopsis of the title. "Deborah R. Geis traces the evolution of Parks' art form from her earliest experimental pieces to the hugely popular Topdog/Underdog to her wide-ranging forays into fiction, music, and film ... [Her works] have been widely produced and have won the highest honors (including the Pulitzer Prize and two Obies), but to date, books on Parks have been scarce."

Suzan-Lori Parks came to DePauw in April 2006, and Geis' book includes several photographs from that visit.

Learn more about Suzan Lori-Parks at the publisher's Web site.

On Thursday, September 18 at 6:15 (EST), Debby Geis will be interviewed on Atlanta's WRFG (89.3 FM). You can access the program via the radio station's Web site.

Professor Geis' previous books include Postmodern Theatric(k)s: Monologue in Contemporary American Drama; Approaching the Millennium: Essays on Angels in America (co-edited with Steven F. Kruger), and the edited collection Considering Maus: Approaches to Art Spiegelman's "Survivor's Tale" of the Holocaust. Learn more about her in this previous story.