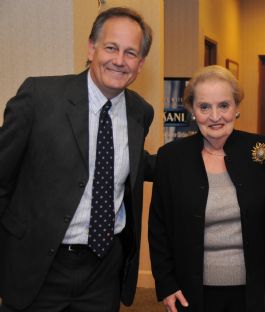 September 25, 2008, Greencastle, Ind. - Ken Owen, executive director of media relations at DePauw and 1982 graduate of the University, will be a guest on Bloomington, Indiana NPR affiliate WFIU this Friday, September 26. A promotional announcement running on the station says, "This week on Noon Edition we'll explore the ways universities craft and manage their images." Owen will be joined on the panel by John Beacon, vice president for enrollment management at Indiana State University, and Angela Tharp, senior associate director of public affairs at Indiana University. (at left: Owen with former U.S. Secretary of State Madeleine Albright last Friday)

Owen joined the DePauw administration in 2001 from Indianapolis ABC-TV affiliate WRTV after spending almost two decades as a news anchor/reporter, the majority of those years at Indianapolis' 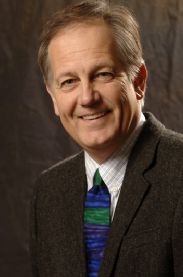 As DePauw's chief communications officer, Owen's duties include interfacing with media outlets, creating news content for the University's Web site, oversees the Timothy and Sharon Ubben Lecture Series, and serves as DePauw's coordinator for the national telecast of the Monon Bell Classic. His work led to a three-year agreement with Mark Cuban and HDNet to televise the great football rivalry through 2009, and he created the "Monon Memories" of past battles for the Bell, which now number 113. Owen also produces DVDs for the Monon Bell, commencement, and Alumni Reunion Weekend. He has taught journalism at IUPUI (Indiana University - Purdue University at Indianapolis) and serves on the board of directors of the Indianapolis Public Relations Society and the communications committee of the Annapolis Group.

The  program will be available live and as an archived file on WFIU's Web site.