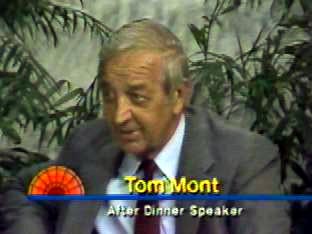 August 10, 1987, Greencastle, Ind. - DePauw University's retired athletic director Tom Mont has been in demand as an after dinner speaker for years, and today he shared some of his favorite stories with a television audience. Mont, who coached DePauw's football team from 1959 through 1976, appeared with Hal Fryar and Tom Fouts this morning on A.M. Indiana, which airs on Indianapolis NBC affiliate WTHR.

[Download Video: "Tom Mont Visits A.M. Indiana" - 603kb] "This happens at our DePauw-Wabash stag, somebody will be giving me a hard time as the DePauw football coach and I'll look out there and I'll say, 'I can't remember your face, but weren't you here two years ago, because I never forgot a tie," Mont offered host Dick Wolfsie, who responded with raucous laughter. (at right: Mont receiving the 1982-83 Alumni Faculty Award from Norval Stephens '51) 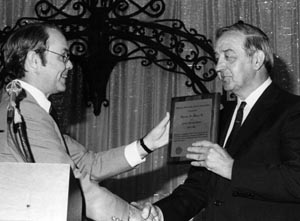 Mont also served up a series of lines on his football "recruit" Igor, which those who have heard the coach address a crowd will remember fondly:

Tommy Mont, who played for the NFL's Washington Redskins, came to DePauw University as head football coach in 1959 after leading the University of Maryland's grid program. Mont guided the Tiger football fortunes until the conclusion of the 1976 season, when he retired from active coaching. He was named director of athletics in 1971 and retired effective June 30.