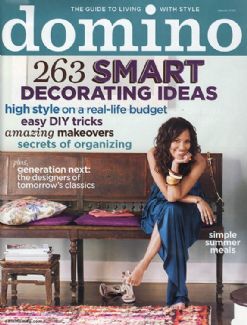 August 1, 2008, Greencastle, Ind. - The Richmond, Virginia home of DePauw University graduates Ted and Katie (Blair) Ukrop "is featured in an eight-page spread in the August issue of Domino magazine," reports today's Richmond Times-Dispatch. The article notes that the Ukrop's are celebrating the issue's release tonight with a party at the couple's art gallery, Quirk. Ted is a 1989 graduate of the University; Katie received her DePauw degree in 1991.

"Katie Ukrop's redecorated Fan home is a reflection of her persona -- a light, airy California-girl look with a strong Richmond sensibility," writes the newspaper's Julie Young. "Walls, woodwork and floors are decidedly anti-antebellum pale pinks, blues and beiges. Gone are the dark hardwoods and deep colors that once dominated the 1892 house. Contemporary furnishings and artwork from Ukrop's gallery, Quirk on West Broad Street, harmonize with classic Virginia pieces." (at right: Katie Ukrop in her home; 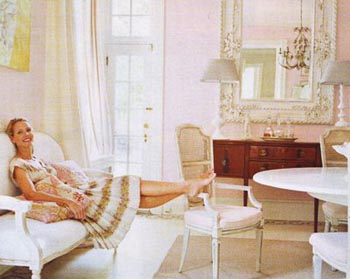 According to Domino's creative director, Sara Ruffin Costello, "Katie's decorating is similar to how she entertains -- light and happy with moments of gravitas ... Ultimately, Katie's house was the perfect fit for Domino: confident, bright, open and warm, with a distinct point of view."

Read more at the Times-Dispatch online. The magazine is on newsstands now.