November 28, 2000, Greencastle, Ind. - "After 14 years in local TV and radio news, WRTV anchor/reporter Ken Owen is leaving the business to become the media relations director at DePauw University," reports Marc D. Allan in today's Indianapolis Star. The newspaper notes that Owen, a 1982 graduate of DePauw, will present his final broadcast on Christmas Day.

"Owen is one of the real talents in local TV news -- a good, honorable reporter and trustworthy anchor," Allan writes.  "He never tried to sell the sizzle if there was no steak."

The article notes that Owen has spent the past two years at the ABC affiliate, and previously spent nine years at Indy's WISH (CBS).  His resume also includes stints at what is now WXIN-TV, and Indianapolis radio stations WIBC and WIRE.  Owen was also primary evening news anchor at Asheville, North Carolina's WLOS-TV and WANE-TV in Fort 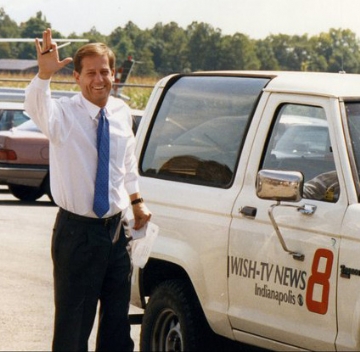 Wayne, Indiana. A communication major at DePauw, he was station manager of WGRE as an undergraduate and has been honored for his work by the Associated Press, Society of Professional Journalists and United Press International, among other organizations.

"TV news has been in my blood a long time," Owen tells the Star.  "But the opportunity to serve my alma mater, to return to a place that's so dear to me, and to be able to contribute to enhancing DePauw's already fine reputation, was too great to pass up."