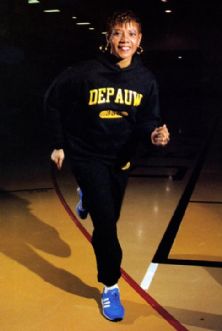 November 13, 1994, Greencastle, Ind. - "She was the Jesse Owens of women's track and field, and like Jesse, she changed the sport for all time," Olympic historian Bud Greenspan says of Wilma Rudolph, who died yesterday in Tennessee at the age of 54. "She became the benchmark for little black girls to aspire," Greenspan tells the New York Times. Rudolph won three gold medals at the 1960 Olympics in Rome and came to DePauw University in 1987 as director of the women's track program and served as a special consultant to the president on minority affairs.

Rudolph "returned to college and earned a degree in education in 1961. She was voted the 1961 Sullivan Award as America's outstanding amateur athlete, male or female," writes Frank Litsky. "She last raced in 1962. She quit, she said, because 'I couldn't top what I did, so I'll be remembered for when I was at my best.' In time, she became a spokeswoman for a movie studio, a baking company and other businesses. At DePauw University in Indiana, she coached briefly and recruited minority-group students. She established the Wilma Rudolph

Foundation, working with youngsters and sending tutors to schools with books on American heroes. 'If I have anything to leave,' she said, 'the foundation is my legacy.'"