Play 101: Games at the College Level

Students in a Peeler Art Center classroom are gathered around a long table, laptops open in preparation for the day's notes. Shortly after the lecture begins, one student's blank screen  gives way to the movement and colors of an online game. One by one, his classmates follow suit.

During a particularly illustratable point, the professor moves to the drawing board that spans the room's side wall. As he does, his eyes catch a student's screen, now filled with the growing pattern of a checkerboard. "Hey," he says, "that's really cool. Show me when you're done with it."

This is Harry Brown’s first-year seminar and the topic is games. The student is setting up an experiment in a game by Princeton mathematician John Conway. Conway’s Game of Life (pictured below left) is really a “cellular automaton,” a tool used to simulate cell growth using a few simple rules. 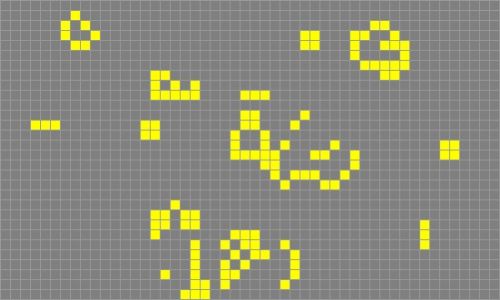 When the student’s checkerboard is finished, he and Brown watch as those rules sweep across the board over multiple generations, creating the convincing illusion of a living organism.

Brown’s course is an introduction to ludology, a term that covers the study of football, chess, World of Warcraft, or anything else that can be played. For the first-year students in the class, it's also a different perspective on academic life at DePauw. It’s a mix of something familiar — games — with the new structure and expectations of a college classroom.

“I’m not really one to play video games,” says Mallory Stidham ’12, a student in Brown’s seminar, “But this class has opened my eyes to what they really are. They are something that challenges your brain to think differently due to the multiple obstacles you face. They are a lot more complex than people make them out to be.”

Appropriately, one of the topics of today’s class is “challenge,” or how to strike a balance between boringly easy and frustratingly difficult. Asked whether they would prefer an easy or hard course, the class’s response is understandably immediate: not too hard, please. However, as the conversation turns to video games, it becomes clear that anything too simple and without risk holds little reward. This is one of the first lessons Brown’s students will learn at DePauw, and its meaning will apply far beyond their graduation day. After all, stories that surprise us are the ones we remember best.

Soon after arriving at DePauw, Brown began to study games for their use as a teaching tool. Of course, games in the classroom are nothing new; they’ve been used to teach spelling, math and even how to get to Oregon in a Conestoga wagon. Using them to address Aristotle’s Poetics, however, is rather unique. Initially, the interactive nature of games allowed Brown and his students to break away from literary conventions in narrative structure. Since then, his courses have expanded to discuss the nature of play itself, a topic well suited to a liberal arts education.

“Taking a broad approach to games allows us to draw not only from recent work in game studies, but also from traditions of scholarship in philosophy, sociology, psychology, literature, and history. We're not just playing Pong, Pac-Man, and Portal, but using these games and others to answer some fundamental questions about human experience,” says Brown.

Having played games since he was eight years old, the change from play to study hasn’t made games any less interesting for Brown. His laptop is filled with games that span the history of programming, made playable using software that emulates old and rare—or rarely working—game machines. Many of them are for research or demonstration in one of his classes, but there are clearly enough to suggest that some are for a more practical use: having fun.

“Studying games doesn't kill the joy I take in playing them,” says Brown. “Games are just like books in that respect—the more deeply I understand then, the more I love them.”

Harry Brown is an associate professor of English at DePauw. In addition to his work on campus, Brown also teaches a course on ethnic literature at Greencastle High school. More information about his recently published Videogames and Education can found in a previous story, and his earlier book Injun Joe's Ghost can be read about here.