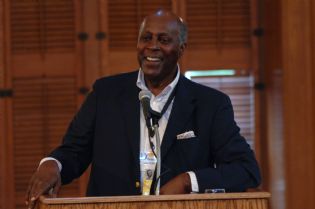 December 10, 2008, Greencastle, Ind. — "We are here under a mathematical impossibility -- each of us thinks he is Vernon Jordan's closest friend," said David Bradley, owner of Atlantic Media, at an event celebrating the release of Vernon Jordan's new book, Make It Plain: Standing Up and Speaking Out. Today's Washington Post reports that more than 200 guests attended Monday's party, including Michael Beschloss, Eleanor Holmes Norton and George Vradenburg. Jordan is a 1957 graduate of DePauw University.

Jordan, "D.C.'s consummate insider (civil rights leader, BFF of Bill Clinton, senior managing director with Lazard Frères & Co.) had plenty of serious reasons for penning (his book), a collection of his speeches from 1971 to 2008.," write Amy Argetsinger and Roxanne Roberts. "It's my interpretation of the crucial events in the civil rights movement -- much of which is not recorded from a personal viewpoint," he tells the Post. "It's my view, my take, my experience, and what I learned."

Read the full column at the newspaper's Web site.

Vernon E. Jordan Jr., the former president of the National Urban League, serves as an advisory member of DePauw's Board of Trustees. Released last month, Make It Plain was recently featured in Newsweek.